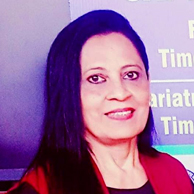 Dr Sumita Jain is a Senior Professor of Surgery and head of a unit in SMS Medical College and Hospital in Jaipur. Among her vast academic accomplishments, she holds the honor of topping the Rajasthan Public Service Commission (RPSC) examination in 1995. She was awarded the Vivekanand Gaurav Sammaan in 2007. She has authored numerous international publications, including a worldwide prospective observational study of sepsis severity score on acute appendicitis published in the World Journal of Emergency Surgery. She has also served as a panelist in several important discussions on Breast Cancer including CPG Oncology and Breast Cancer Update.She was invited as a faculty speaker at World Cancer Congress Miami, Breast Congress in Rome and APHC in Philippines.  She is the founder and president of Women Cancer Society, Rajasthan, a NGO working to increase awareness about breast cancer among women of Rural Rajasthan.