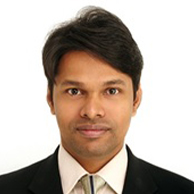 Md. Hafiz Uddin is a postdoctoral fellow at the Department of Oncology, Wayne State University. He was awarded the prestigious Graduate Scholarship for Excellent Foreign Student (GSFS) fellowship for his Ph.D. program at Seoul National University, South Korea. During his Ph.D., he worked on the mechanism of carcinogen-parasite induced bile duct cancer in hamster model. In his postdoctoral research, he focused on the mechanism of chemoresistance and molecular targets in ovarian, breast and prostate cancer and their association with cancer stem cells, unfolded protein response, drug synergy, TRAIL, MAPK and DNA damage pathways.