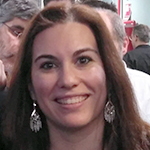 2nd International Conference on Biotechnology
Diana Mate obtained the Bachelor's degree in Chemistry from the Autonomous University
of Madrid in 2008. She did her PhD studies in Dr. Miguel Alcalde group at the Institute of
Catalysis (CSIC, Spain) between 2008 and 2013. Her PhD dealt with the engineering of fungal
laccases for biomedical applications. In June 2013 she received the PhD in Molecular
Biosciences from the UAM. In 2014 and 2015 she was a postdoctoral researcher in Prof. Ulrich
Schwaneberg group at the DWI-Leibniz Institute for Interactive Materials (Germany). There,
she was involved in collaborative projects for application of sortases in microgel synthesis. In
2016 she rejoined Alcalde group where she worked in a project in collaboration with industry.
In 2017 she joined the Department of Molecular Biology of UAM, where she currently works
as a researcher and collaborates as lecturer. She is co-author of 20 SCI articles, 4 book chapters
and 4 patents.