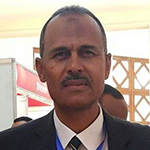 3rd International Conference on Geology & Earth Science
Zakaria Hamimi is a Professor of Structural Geology spent the majority of his academic career at Benha University (Egypt) along with some years at Sanaâ€™a University (Yemen,) and King Abdulaziz University (Saudi Arabia). He has graduated (1984) from Assiut University (distinction with honor degree), and holds the M.Sc. (1988) from Zagazig University (Egypt) and the Ph.D. in Structural Geology and Tectonics (1992) from Cairo University. Zakaria Hamimi is the president, and one of the founding team, of the Arabian Geosciences Union since 2012.  He has received the medal of the Egyptian Geological Society of Egypt in 2015, and also the medal of the Arab Mining and Petroleum Association in 2016.

His research interests focus on Structural Geology, Microstructures and Tectonics. He has worked in many field-related sub-disciplines of Earth Sciences including geologic mapping, microstructural analysis, strain analysis, paleostress reconstruction, active tectonics, tectonic geomorphology, crustal deformation and image processing. He used all these fields to study key areas in the Arabian-Nubian Shield, and to decipher their deformation history.