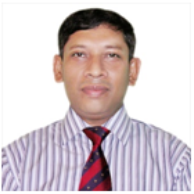 Dr. Zainul A. Siddique has been engaged actively in teaching and research since 1995. Having graduated from the University of Chittagong, he joined as a lecturer in the same University after a short tenure at another Science and Technology University in Bangladesh. He acquired several prestigious awards and fellowships in home and abroad during my academic career. He obtained PhD from the school of science of Osaka University, Japan in 2003 with the Government fellowship-worked on the characterization of photoluminescent compound by laser experiments and quantum chemical approach (i.e., Computational Chemistry). He had his post-doctoral research on the synthesis of MRI agent in the school of engineering of Kyoto University, Japan in 2008. He had patents for the same from Japan and USA.  Few of his works were published in the American Chemical Society Journals (Inorg. Chem.) and very recently in Wiley (AOC), Springer (SNAS) Journals on drugs. He is a reviewer in many national and international Journals and he had teaching experience as an adjunct faculty has been encompassing in many international and national Universities. He has been working as an external examiner and member for examinations conducted by Cambridge International Exam Services (CIES) and public Universities. He visited many foreign Countries as an invited speaker in international conferences.