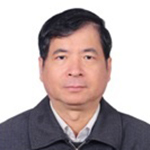 Dr. Yuansheng Wang received his B.S. degree (1982) from University of Science and Technology of China (USTC), M.S. degree (1985) from Institute of Solid State Physics, Chinese Academy of Sciences (CAS), and Ph.D (1989) in Condensed Matter Physics from USTC. He was appointed the position of Professor of Chemistry in Fuzhou University, China in 1999. He has Joined Fujian Institute of Research on the Structure of Matter (FJIRSM), CAS as a Professor since 2002, leading a group conducting researches on optoelectronic nanomaterials. He has published over 160 academic papers in the mainstream international SCI journals, and received more than 6000 citations, with the h-index of 44.