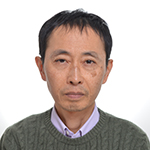 Prof. Yoshihisa Godo received his PhD degree from the University of Kyoto in 1992. His areas of research include development economics and agricultural economics. Professor Godo's Development Economics (3rd edition), co-authored with Yujiro Hayami and published by the Oxford University Press in 2005, is especially well known. His book written in Japanese, Nihon no Shoku to Nou (Food and Agriculture in Japan), received the 28th Suntory Book Prize in 2006, one of the most prestigious academic book prizes in Japan. He is also engaged in various social activities such as the Special Councillor to the Osaka City Government.