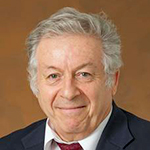 Dr. Yoseph Bar-Cohen is a Senior Research Scientist and Supervisor, Advanced Technologies Group (355N) and the NDEAA (NDE & Advanced Actuators) Lab (http://ndeaa.jpl.nasa.gov). He is a Fellow of two technical societies: SPIE and the American Society for Nondestructive Testing (ASNT). He received his Ph.D. in Physics (1979) from the Hebrew University, Jerusalem, Israel. He made two notable discoveries of ultrasonic wave phenomena in composite materials: the leaky Lamb waves (LLW) (1983) and the polar backscattering (1983). He (co)authored over 330 publications, made numerous presentations at national and international conferences, (co)Chaired 38 Conferences, and he has 19 registered patents. He is the (co)Editor and coauthor of 6 books and Editor of 2 Book Series. He is the initiator of the SPIE Conf. on electroactive polymers (EAP), which he has been chairing since 1999. He challenged engineers and scientists worldwide to develop a robotic arm driven by EAP to wrestle with human and win and he organized the first competition as part of the 2005 EAPAD conference. For his contributions to the field of EAP, Business Week named him in April 2003 as one of five technology gurus who are "Pushing Tech's Boundaries." His accomplishments earned him NASA Honor Award Medals for exceptional engineering (2001) and technology (2006) achievements, SPIE's Lifetime Achievement Awards for NDE (2001) and Smart Materials and Structures (2005), 2006 ASNT Sustained Excellence award, the 2007 SPIE President's Award and many other honors and awards.