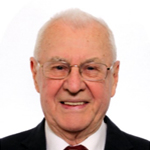 Chief Scientist of the National Research Gamaleya Centre of Epidemiology and Microbiology, Russia

Zuev Victor Abramovich was born on July 16, 1929 in Moscow to the family of a doctor. He graduated from the Second Moscow Medical Institute in 1953 and a postgraduate course in Virology in 1957. He is a Doctor of Medicine, Professor of Virology. He has been a Chief Researcher at the National Research Center for Epidemiology and Microbiology named after Gamaleya since 1960. He is the author of 300 publications, including two Certificates for Discovery (â€œThe property of influenza viruses to cause slow infection in the offspring of mammalsâ€ and â€œThe phenomenon of accumulation of the aging factor in mammalsâ€), 3 patents, and 8 monographs. He is an Honored Scientist of the Russian Federation, Honorary Vice-President of the Russian Academy of Natural Sciences, Member of the New York Academy of Sciences.