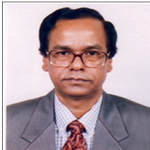 Dr. Howlader has considerable experience in social science research. He is the author or co-author of several books, a number of monographs and research reports, numerous articles in journals and chapters in edited books, and a good number of seminar papers. Another book is going to be published shortly.