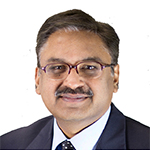 His research is focused on the study of neural and neurochemical mechanisms that control human brain functions. He developed a neurotransmitter imaging technique called, the single scan dynamic molecular imagingtechnique (SDMIT) to detect, map, and measure neurotransmitters released acutely in the human brain. Using this technique, he studies dopaminergic control of human cognition and behavior. His research is funded by the National Institutes of Health, Department of Veterans' Affairs, Dana Foundation and other agencies. He has published over 200 papers, several book chapters and a book titled 'Neuroscience of the Nonconscious Mind'.