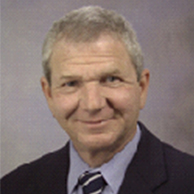 American College of Clinical Pharmacy, Russell R. Miller Award for sustained and outstanding contribution to the literature of clinical pharmacy, 1987