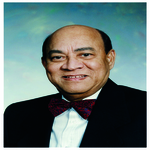 Dr. Krishnamurti Dakshinamurti, Emeritus Professor of Biochemistry and Molecular Biology, University of Manitoba, Winnipeg, Canada, received his PhD in 1957. After working as a Senior Research Associate at the University of Illinois, Urbana, IL, and at the Massachusetts Institute of Technology, Cambridge, MA, he was appointed Associate Director of the Research Institute, Lancaster, PA. He was invited to the University of Manitoba, Faculty of Medicine as Associate Professor of Biochemistry and Molecular Biology in 1964, becoming Full Professor in 1973. He spent 1974 â€“ 75 as Visiting Professor of Cell Biology at the Rockefeller University, New York. He received the Borden Award of the Canadian Societies of Biological Sciences in 1973.He was elected Fellow of the Royal Society of Chemistry, Fellow of the Royal Society of Medicine, U.K., and Fellow of the American College of Nutrition, Fellow and President of the International College of Nutrition. He is the author of over 200 peer reviewed publications and six books in the areas of metabolic biochemistry, nutrition and neuroscience.Dr. Dakshinamurti has been on the Editorial Board of many international journals. Dr. Dakshinamurti was elected to Emeritus Professorship of the University of Manitoba in 1998. He was Co-Director of the Centre for Health Policy Studies at the St.Boniface Hospital Research Centre abd is the Senior Advisor of the Research Centre.