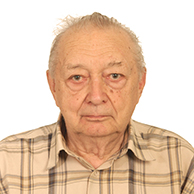 GeorgievGeorgii P is a senior scientist and a Doctor of biological sciences. He is the head of Department of Nucleic Acids Biosynthes at the Institute of Molecular Biology. He is the Organizer and Director of Institute of Gene Biology, Russian Academy of Sciences (IGB RAS). Since 2006 he is the main scientific advisor in IGB. He is also a Member of RAS, German, Norvegian and Spain Academies, Academia Eupopaea, EMBO.

Georgiev George Pavlovich with his team Showed the key role of the Mts1 protein in the induction of tumor metastasis and revealed a number of mechanisms for this effect. He also discovered the tag7 gene in 1997, whose product Tag7 protein is a protective anti-cancer protein. The mechanisms of its antitumor action were established, and antitumor vaccines undergoing tests were created on its basis.
Discoveries: 1961-62 nuclear dRNA (hnRNA), isolation, properties, mRNA precursor, 1965-67 nuclear RNP particles, structural organization, 1977 mobile genetic elements in animal cells, 1993-98 genes controlling tumor metastasis and protective antitumor gene, antitumor vaccine.