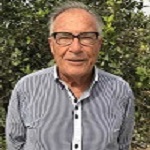 Salvador Zamora Navarro is  from University of Murcia Professor Emeritus and Professor of Physiology.
Founder of the Nutrition Research Group.

Academic Constituent Number of the Academy of Pharmacy Santa MarÃ­a de EspaÃ±a of the Murcia Region.

He holds a PhD in Pharmacy from the University of Granada and a Diploma in Nutrition and Pharmacist Specialist in Clinical Analysis.


It has received different awards and decorations:

Favorite Son of the Village of MazarrÃ³n by the plenary of his Excellency City Council, 2013.

Professional Merit Medal of the General Council of Official Associations of Pharmacists of Spain, 2006.

Alumni Association Medal. Faculty of Pharmacy of the University of Granada, 1968.

Silver Medal of the Official Pharmacists College of Murcia Region.

Honor Collegiate of the Official Pharmacists College of CastellÃ³n.

Golden Olive of the Official Pharmacists Association of Jaen.

Gold Badge of the Spanish Society of Aquaculture, 2005.

Cross of Naval Merit, granted by His Majesty the King, 1995.