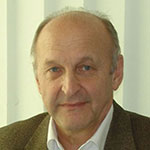 3rd International Conference on Geology & Earth Science
Prof. Dr. Armin Gruen was  Professor and Head of the Chair of  Photogrammetry(1984) at the Institute of Geodesy and Photogrammetry, Federal Institute of Technology (ETH) Zurich, Switzerland . Since 1 August 2009, he is retired and is now with the Chair of Information Architecture, Department of Architecture, ETH Zurich.
Prof. Gruen has held lecturing and research assignments at various Universities and Research Facilities in Germany, Italy, Finland, Netherlands, USA, Australia, Taiwan, China.
He has published more than 500 articles and papers and is Editor and Co-editor of over 21 books and Conference Proceedings. He has organized and co-organized/co-chaired over 35 international conferences and he has served as a consultant to various government agencies, system manufacturers and engineering firms in Germany, Japan, Korea, Switzerland, USA and other countries. He is co-founder of CyberCity AG, Zurich and 4DiXplorer AG, Zurich, Switzerland.
Currently he is involved as PI in the international project MOOREA IDEA (Island Digital Ecosystem Avatar) â€“ an Avatar for tropical islands, contributing mainly to the physical modeling aspects of the project. He also acts as the scientific-technical leader of the R&D project on 3D/4D city modeling in the context of the â€œVirtual Singaporeâ€ project (â€œFCL Virtual Singaporeâ€).

He is currently mainly involved in a project on 3D/4D city modeling in Singapore (FCL-Virtual Singapore) and a project on environmental modeling of a tropical island (Moorea IDEA â€“ Island Digital Ecosystem Avatar), Moorea, South Pacific.