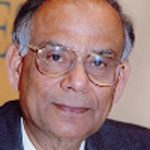 Ananda M. Chakrabarty, Ph.D., is a Distinguished University Professor at the University of Illinois College of Medicine at Chicago. While working at the Research & Development Center at General Electric Company in Schenectady, New York, he was awarded the 'Scientist of the Year' award in 1975 by Industrial Research Organization of the United States.  This work led to the development of a genetically-manipulated microorganism that was the subject matter of a landmark decision from the Supreme Court of the United States that genetically engineered life forms are patentable.   Dr. Chakrabarty has served as a consultant with the United Nations and was the founding member of a UNIDO Committee that proposed the establishment of the International Centre for Genetic Engineering & Biotechnology (ICGEB) based in Trieste, Italy, New Delhi, India, and Cape Town, South Africa.  Dr. Chakrabarty has been a member of the Panel of Scientific Advisors, later called Council of Scientific Advisors, of ICGEB since its very inception.  Dr. Chakrabarty has also been a member of the International Advisory Board of Chulabhorn Research Institute in Thailand, which is headed by the Princess Chulabhorn of Thailand, and a member of the Scientific Advisory Committee of the Department of Biotechnology (DBT) under the Ministry of Science & Technology, Govt. of India.   He has received many awards, including the Distinguished Scientist Award from the United States Environmental Protection Agency (EPA), MERIT Award from NIH, U.S. Army Distinguished Service Award, Pasteur Award, Inventor of the Year Award, American Chemical Society Public Affairs Award, Procter and Gamble Environmental Biotechnology Award, European Union Eurydice Award given in Brussels in 2007, among others