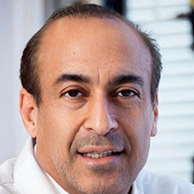 Alexander Seifalian, Professor of Nanotechnology and Regenerative Medicine worked at the Royal Free Hospital and University College London for over 26 years, during this time he spent a year at Harvard Medical School looking at caused of cardiovascular diseases and a year at Johns Hopkins Medical School looking at the treatment of liver. He published more than 647 peer-reviewed research papers and registered 14 UK and International patents. On editorial boards of 41 journals. He is currently CEO of NanoRegMed Ltd, working on the commercialisation of his research.  During his career, Prof Seifalian has led and managed many large projects with successful outcomes in terms of commercialisation and translation to patients. In 2007 he was awarded the top prize in the field for the development of nanomaterials and technologies for cardiovascular implants by Medical Future Innovation, and in 2009 he received a Business Innovation Award from UK Trade & Investment (UKTI). He was the European Life Science Awards’ Winner of Most Innovative New Product 2012 for the “synthetic trachea”. Prof Seifalian won the Nanosmat Prize in 2013 and in 2016 he received the Distinguish Research Award in recognition of his outstanding work in regenerative medicine from Heals Healthy Life Extension Society. His achievements include the development of the world first synthetic trachea, lacrimal drainage conduit, and vascular bypass graft using nanocomposite materials, bioactive molecules and stem cell technology. He has over 15,000 media report from his achievement; include BBC, ITV, WSJ, CNN, and many more. Currently, he is working on the development and commercialisation of human organs using graphene-based nanocomposite materials and stem cells technology. He has commercialised a novel functionalised graphene oxide for medical and other industrial applications. He also commercialised new biodegradable nanocomposite materials for medical and other industrial applications. He is British citizen and completed his school in UK (concord college) and his scientific training at London University.