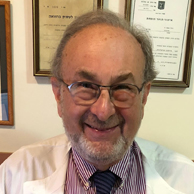 Editorial Board Member of the  Journal of Reproduction System & Sexual Disorders

He has a special interest  in  in vitro maturation of oocytes,  poor responders, PCOS ,  IVF outcome,  luteal support in IVF, pioneered IVF treatment with minimal stimulation and egg donation law in Israel , researching and publishing  intensely in these fields.

Received 2018 Award of   the Israeli State Physicians Association for his contribution  to the entire medical community.