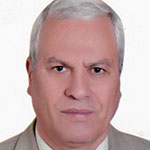 Prof. Dr. Abdelaal Abouelela Abdelaal was born in 1946, in Egypt. He is currently working as a professor in the geology department as faculty of Science at Alexandria University, Egypt. He obtained his Ph.D. in Macro-Paleontology and Stratigraphy, Department of Geology, Kharkov State University, USSR (Russia), 1979 and specialized in Macro-Paleontology and Stratigraphy.
He worked as Chief of Geology Department, Faculty of Science, Alexandria University, Egypt from 2003 - 2006. He is a Member of the scientific committee for the promotion of Professors of Geology in Egypt from 2004 - 2008.
He has attended many conferences like Third conference on Mesozoic and Cenozoic Brachiopoda, Kharkov State University, USSR  Second international conference, Winnipeg, Canada and The international conference of the Saudi Arabia society of earth science, King Saud University, Riyadh, KSA. Most of the intentional conferences settled at various universities in Egypt.